What is Male PGAD?

Persistent Genital Arousal Disorder in males, also known as Male PGAD or Restless Genital Syndrome or Persistent Genital Arousal Syndrome, is a condition characterized by unrelenting, spontaneous and uncontainable genital arousal. This disorder has been mostly studied in females; however, it is not limited to women. Cases of persistent genital arousal disorder in males are now being reported more often. 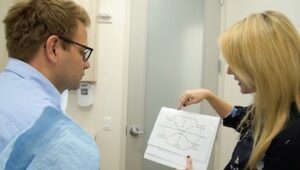 Patients are typically worked up by urologists for penile ischemia, as well as prostatitis (bacterial or abacterial), urinary tract infections, and Peyronies.

The condition Hard Flaccid Syndrome and its symptoms overlaps with persistent genital arousal and is quite possibly the reason the diagnosis of Persistent Genital Arousal Disorder in Males has been missed in so many patients. Hard Flaccid Syndrome is considered a condition where the penis is hard to touch, however not erect. During a typical state of flaccid, the penis is soft or spongy. In this condition, the penis is hard (about 30-40% as compared to an erection.) Males are less likely to report symptoms of erectile disorders, pelvic pain, and sexual dysfunction as compared to females.  Some existing risk factors may be; anxiety andstress, gender (male), prolonged sitting, biking, hernia, prior pelvic surgery, and pelvic floor muscle spasms.

At Pelvic Rehabilitation Medicine our practice is composed of both males and female as we believe all pelvic floors are created equal. By treating the chronic muscle tension in patients with hard flaccid, we are able to improve blood flow to the pelvis by creating space and allowing for oxygenation. We also decrease the muscle tension with trigger point injections to the pelvic floor muscles that are done externally with ultrasound guidance. Our treatment also shuts down the chronic pain cycle that causes these symptoms to persist.

If you think you may have Male PGAD or Hard Flaccid Syndrome, we can create a treatment plan after a thorough history and physical examination are done.